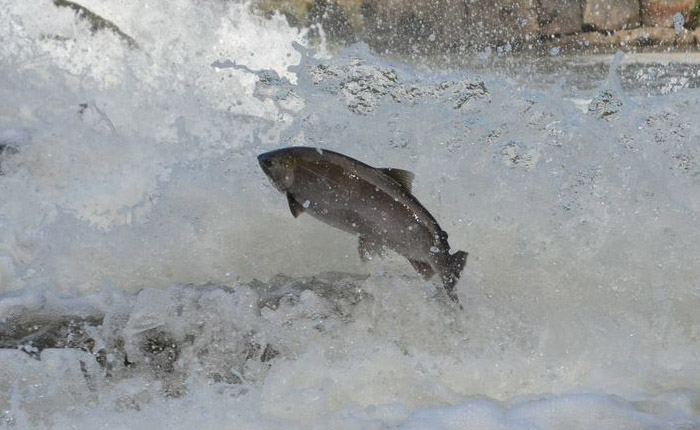 Steelhead have been present in the Credit River for nearly 100 years, however they only established a self sustaining population in small numbers around 1970. Prior to 1970 they were completely stopped from migrating up the river due to impassible dams. The largest of which was removed in 1940 in what is now Erindale Park.

Steelhead were stocked in large quantities from 1976 to 1988 (80,000 to 170,000 smolts per year) by the MNR. The run during this time was only 5% wild. The steelhead large runs were directly related to the stocking of the time. By 1980 some steelhead were reaching the good spawning water above Norval and had good success. However only fish that could jump past the Streetsville Dam could even reach Norval. The fish ladder the CRAA operates at the Streetsville was constructed in 1980 by the MNR. By 1985 the steelhead run was estimated to about 15,000 steelhead of which about 10% was wild. The MNR decreased stocking in 1989 to the present in significant numbers and are now stocking about 40,000 (20,000 to 60,000) steelhead per year into the Credit River. However, the steelhead run is now growing and is almost entirely wild due to CRAA’s work. In 1992 the steelhead run was approaching 20% wild and was about 12,000 fish. In 1995 the run was only 8,000 fish but 68% wild. In 1997 the run was about 11,000 and it was a whopping 85% wild. The great news is juvenile counts for 1996 and 1997 are about five times higher than ever before. The result should be a lot more wild steelhead by the year 2000.

The Pacific salmon fishery consists almost entirely of Chinook (king) salmon with an estimated run in excess of 20,000 each fall. Until recent years the chinook salmon were almost all hatchery fish, but the last few years there has been a lot of natural reproduction. The chinook salmon are stopped at the Streetsville Dam by the MNR under their fish management policy.

The reason for stopping the chinooks is to control their numbers (due to the forage population concerns in Lake Ontario), and to prevent trespassing problems upstream. However, due to their life cycle the newly hatched chinook salmon which emerge from the gravel in May leave the river before water temperatures become lethal in July in the lower river. For this reason they have become very successful producing tens of thousands of juvenile salmon this past spring.

The chinook fishery is extremely popular at the mouth of the river from late July to early October. Thousands of anglers try their luck from the piers and boats. The first big salmon run usually occurs between September 8th and 18th every year. During cold summers or if we have a cold rain in August smaller numbers of fish may enter. For example, in 1992 about 300 fish ran in the middle of July.

They all sat in the first few pools below the Streetsville Dam (which is open to fishing until August 15th. For those of us who knew, we had a great time catching aggressive silver chinooks up to 35 lbs. On August 23, 1997 a run of few thousand salmon ran the river and for the few anglers that were on the river the fishing was excellent. Again, catching bright salmon that were aggressive with virtually no fishing pressure. The chinooks are in good numbers in Erindale Park from the middle of September to early November when they disappear. Their runs are timed with the rains just like the steelhead.

Coho salmon were very popular in the Credit River but the MNR stopped stocking them in 1991. Every year a small number of coho stray into the Credit but they are uncommon at the present time. The good news is anglers pressured the government and the MNR stocked 40,000 coho’s into the Credit this fall (1997). Those fish will return in the fall of 1999! Can’t Wait! The coho fishery was during the month of October previously, but the new strain of coho’s is from the Salmon River in New York so they may show up in September if we’re lucky.

Pink salmon are the last species of Pacific salmon available, but they are very rare and are not targeted by anglers. They often run in September with the first run of chinooks, but the run is at best a few hundred.

Salmon fishing is done at the river mouth by casting lures such as cleo’s, crocodiles and other heavy spoons. A lot of anglers also bottom fish with roe or large white marsh mellows. In the river roe and flies are the top choices for anglers. Float fishing and bottom bouncing are most popular with some anglers fly fishing. Fresh run fish are often aggressive and will take bright flies readily

The crowds are heaviest the day or two following a rain and on weekends in September, but by the middle of October the crowds are small and there is still plenty of great fishing.

The MNR began stocking Atlantic salmon into the Credit River in 1988 in an effort to re-establish the species in Lake Ontario.
Initial results were fairly good with a good number of adults returning in 1990 and 1991 (100 to 500 each year). Unfortunately that strain of fish was lost and the new strains have not done well. The MNR began various studies to determine survival and competition in the river and results are good, but the adults have not returned. The most likely reason for the lack of returns is probably mortality in the lake, but there is nothing conclusive.

CRAA began hatching and stocking Atlantic salmon with the MNR in 1996. We will not have any adults returns until 2000, but juvenile survival has been very good.

Atlantic salmon are out of season all year in the Credit River and must be released immediately if caught.

The resident fishery is entirely self sustaining and is renowned across southern Ontario. The credit for this fishery goes to Trout Unlimited and the Izaak Walton Fly Fishing Club working with the CVC and the MNR for the past 20 years. CRAA has been active in rehabilitation work with the two clubs since 1993 and we continue to have an excellent working relationship.

Bass fishing can be excellent in the lower Credit River, but people fishing before the bass season open often harm the fishery. However, every summer there are good numbers of smallmouth bass in all the deep pools and pockets from the Streetsville Dam to the mouth. There are also some bass between Streetsville and Norval, but the numbers are very low. The CVC has worked with the MNR and CRAA to move adult and juvenile bass into the mid-section of the river to create another fishery. In time we hope the bass will take hold in good numbers.

July is best bet for fishing in any of the excellent holding pools. Some anglers enjoy popping a small fly over the surface with their fly rod, while others have excellent success with jigs and live bait. The bass usually migrate back to Lake Ontario by late August when the salmon arrive. 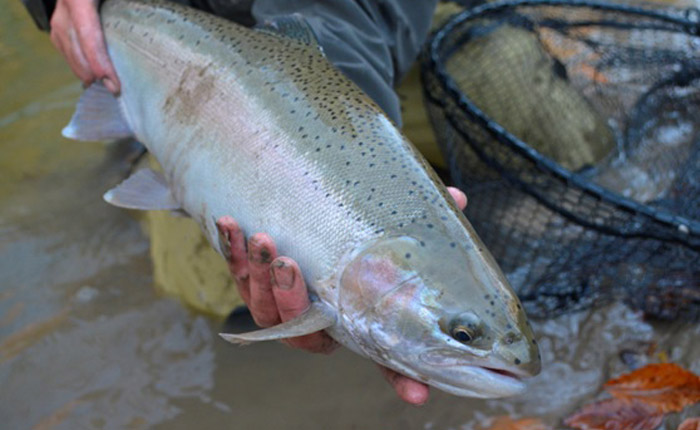 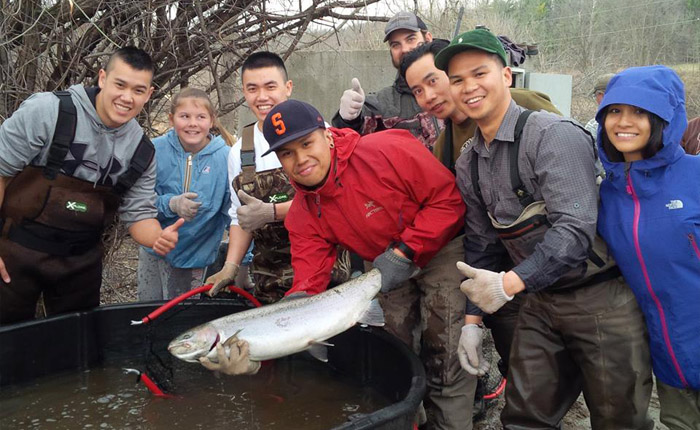